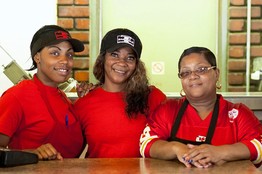 At the fork in the road in East Kansas City you'll (barely) find LC's, a corner drive-up that diners have sought out since 1986 for its grit and authenticity. Just a block east is Big T's (pictured here), no less of a BBQ destination, featuring a family-suitable dining room. In the glare of neon lights, amongst a smatter of no-frills tables, feast on triple-decker burnt-ends brisket with white bread; meaty spare ribs; tender turkey and sweet BBQ beans. LC's (left and right) served our eating team's all-around favorite fries, thick-cut and crispy. Order the meats "dry," as the kitchen can over-ladle. Big T's dishes up Deep South sides and a tender brisket with K.C.-styled sauce. Both spots are cash only, but locals advise against crossing traffic to an ATM—"you won't get hit by a car, you'll get robbed." LC's: 5800 Blue Parkway, 816-923-44840; Big T's: 6201 Blue Parkway;bigtbbq.com

Ed Levine's Serious Diet, Week 142: Are You Good About Exercising While Traveling?

Sometimes, when I'm packing for a trip I think about not bringing my exercise gear. And then I think again, because I realize when I'm eating my way through Kansas City barbecue and fried chicken joints that not exercising every day would be a form of diet suicide. It would be like giving in, like the worst kind of surrender, without dignity or grace.

So I pack my running shoes, my shorts, athletic socks, an extra t-shirt, and my swim goggles with my Fine waterproof MP3 player attached, and I head out the door. I did so twice this week, and boy was I glad I did. Both Kansas City and Washington, D.C., offered much in the way of diet disaster potential, and maybe the elliptical trainer in both hotels I stayed in will save my diet bacon.


L.C.'s had, as advertised, the best burnt ends I've ever had.


I really liked Kansas City. The weather was beautiful, my hotel (the Raphael) was great (except for the painfully slow elevators), and the barbecue and fried chicken at their best was downright sublime. Two barbecue joints, the frequently celebrated L.C.'s and the unheraldedBig T's, stood out. I was tipped off to Big T's by one of the valet parkers at the Raphael, and man was it good: extraordinary rib tips, ribs, burnt ends, and a seriously delicious barbecue sauce that had the right balance of sweet and savory flavors. L.C.'s had, as advertised, the best burnt ends I've ever had. Big T's was right down the road from L.C.'s, and both were a ten minute drive from the hotel.

I had hit the elliptical trainer a few hours before, after I had already been to Arthur Bryant's, Gates & Sons, and Stroud's for book-worthy fried chicken. I hit it again early the next morning.

I was in D.C. for just one night and the following morning, but after having a terrific meal (have the bacon pecans, duck breast with Jerusalem artichokes, and the butterscotch pudding) with old and dear friends at Ripple, a restaurant opened by a former cable television executive I have known a long time, I managed to squeeze in another session on the elliptical trainer at my D.C. hotel, the lovely Palomar, at six the following morning.


We'll see if all these elliptical trainer sessions succeeded in staving off diet disaster. Here we go: 222. Plenty of pleasure and pain, and no gain (or loss). All in all, not bad. Maybe exercise did save my diet bacon.

after being directed to L.C.'s, by Yelp, Chowhound or whatever other foodie or BBQ review site you are using, walk inside and then turn 180 degrees around, walk out, get back into your car and drive down the street to Big T's.  You just avoided getting served fat pieces of gristle at L.C.'s.  You'll thank me later.

Huge portion of meaty, smokey deliciousness.  The fries are also very good.  The sauce is sort of average to be honest.  It's not bad by any means, but it didn't stand out one way or another.

The service; which is at a counter like all the other good BBQ joints, is a lot better than what you will ever get at L.C.'s, where they don't seem to care that you are there at all or at Gates with people yelling at you before you even walk in the damn door.  (I know some people like this, but why?)

I have only tried the burnt ends so I can't comment on their other food, but they are so good I can't see myself ever venturing out.  I had burnt ends at Lil Jake's Blvd BBQ (or whatever name they are using), Smokin' Guns and Big T's all in the same week as part of a little BBQ tour.  We also tried RJ's BBQ Shack, but it was so putrid that I didn't really want to admit that I included it on the tour.  Anyway, Blvd, Smokin Guns and Big T's all have good burnt ends.  But hands down Big T's won the competition.

3/8/20071 photo
I have been wanting to Yelp this place but I could not remember the name but thanks to Yelper Charles L. I can now review it.

My family lives though out the Kansas City area so when I come from California to visit we usually make at least one trip to some BBQ place and my cousin even worked at a KC Masterpiece in Overland Park.

I just didn't like BBQ.  Sweet sauce, messy, ribs are too much work for very little satisfaction but we always went.  It was ok.  I would fill up on coleslaw, potato salad, beans and corn on the cob.

Then last time I was in KC I was coming back from Nevada  where my grandparents live and headed back to our hotel in KC.  It was dark and we were hungry.  I told my SO that I am sure we would run into an area  where their was restaurants but we were on a freeway so you had to look for big signs to see if there was anything there.

Finally we saw a mall.  I said their has to be food near the mall so we exited.  It was a run down maybe even closed down Bannister Mall (thanks again Charles for the info).  Now my SO is getting ...well irritable.  IT'S NOT MY FAULT!  HOW WAS I SUPPOSE TO KNOW THE MALL IS CLOSED!

So we tried driving around the area and we found Big T's.  It is a small stand alone restaurant that was probably once some chain fast food restaurant.  So we stopped.  There was a line of 20 people waiting to put in their order at the counter and we were the only whities in the place, that was a good sign.  I could hear a meat cleaver slamming down behind in the back.  We finally got to the counter and order our BBQ and sat at one of the tables and waited for our order

It took about 20 minutes to get our food but hey it was busy.  It was the best damn BBQ I ever had.  The sauce was not sweet but spicy hot.  Mmmmm it was sooo good.  Oh my god...I actually like BBQ just not any of that wimpy stuff most people like.

The closest place I have found to it in LA is at JR's in Culver City.

I normally wouldn't stop for BBQ on a road trip but as we neared Kansas city our heads started to fill with dreams of burnt ends.  After much back seat google researching we decided on Big T's and I'm so glad we did. The staff was awesome, nice and playful.

We ordered a combo plate and a burnt ends sandwich to share between 3 off us and we had enough left over for another whole meal. The burnt ends were so tasty and if I'm ever back I would probably just order that. Their sauce is hot and a little spicy which is not my favorite but it really grew on me until I was sucking it with glee off my fingers.

My son and I are driving cross-country as he moves to a new job. We researched for a great example of Kansas BBQ and came to Big T's. We weren't disappointed. Loved it all. We ate at Blue Ridge Blvd site. Pleased to see small lunch crowd, plentiful parking, friendly staff and fast service. Thanks for a great find!

Ive been eating here for a few years and overall the experience has been good. I feel their sandwiches are the strong point. Big portions thick juicy and smoky on some sauce sopping white bread. IMHO the only bread that doesn't take away from the Que. The burnt ends are a little inconsistent, and don't always come from the point so they have been dry once or twice. If you tell the cook you want them from the point you'll get them juicy and they're very tasty. There's a fine line between juicy and fat but fat is where the flavor is and when its properly cooked just enough renders out in to the meat making them Nirvana in the BBQ world. Ribs sausage and pulled pork are all worthy of your time. There sauce to me is near perfect not sweet or hot not too ketchupy, it has a lot of depth w/o crazy spices that shouldn't be on BBQ. I know this is highly personal and everyone has their own favorite sauce or no sauce for that matter. I'm just not a " cake frosting masterpiece " kind of Guy. They're fries are fresh cut skin on good and they have some pretty good Collard greens which I get everytime I go. The combo plate is good for 2-3 meals. One of the reasons I rated T's so high is he cooks in a brick pit old school with hickory and oak. This isn't a set it and forget it cookie cutter BBQ place. It takes some practice to work the BBQ magic consistently from a freestanding brick pit and that's where the word Pitmaster came from

We were actually looking for another BBQ shack, but when we pulled up it was closed.  Luckily we had spotted Big T's on the side of the road nearby.  The smoky smell as we walked in was a great sign!
The ribs were falling off the bone and the burnt ends were more like sliced beef brisket.  There was a BRIGHT pink smoke ring on everything.  The beans were smoky with pieces of meat.  And the portions were huge!
The vote was unanimous, we all loved it.